I've tried this blogging thing before and the most entries I ever posted was 3. Big whoop. I find reading others' blogs so enjoyable that I'd like to return the favor to whoever out there finds what I have to say entertaining to whatever degree. It's tough to figure out what your first blog entry will be about, but when I stopped to think about what I've thought of most this week, I realized my first blog should be about Three. 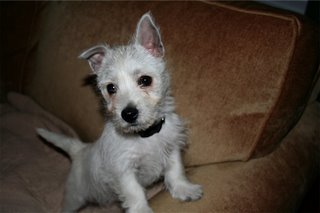 Three is mine and Seth's first puppy dog. She's the most adorable, picture-perfect West Highland White Terrier on earth. We bought her as our gift to each other for our first wedding anniversary. We named her Three since we were married on December 3, 2005 - we wanted her name to remind of us our marriage and wedding day, not to mention she's the 3rd official member of our family. She arrived from a breeder in Missouri over Thanksgiving weekend 2006 and was only 8 weeks old! She's a brave girl - she was put in a puppy crate and flew 2 flights to arrive at RDU where we picked up her up. I was the first one to pull her out of her crate and at 4.5 pounds it was love at first site!

Having never had or been responsible for a doggie that young, the first couple of weeks were a challenge and I found myself longing for the weekends we could sleep in and not get up early to let a dog outside. It was tiring, but as the weeks wore on Seth and I both began to realize, "Hey! We LOVE this dog!" Three is really the best and I really had no idea how much I could love a dog until I got my own and was responsible for caring for her, feeding her, and teaching her. We definitely lucked out with Three. She's super smart and we taught her to sit, lay down, go to her crate, and shake hands very quickly. She picked up on each skill in less than an hour and still LOVES to shake hands.

Three is very social and has yet to meet a person or dog she doesn't like. I think it helps to socialize dogs from the get-go and it didn't hurt that her first 8 weeks of life were at a breeder's home where plenty of other dogs lived. The first time we brought her out of her crate in Raleigh we were at George and Leigh's and we introduced her to their pug, Rotunda. Three just wanted to lick her. From there, we took her to meet my parents and their poodle, Chrissy (RIP) - again, she wanted to lick! Now that the McFarland's have added a new basset puppy, Wyatt, to their family, he is Three's main playmate and they've spent a few nights and weekends together when Seth and I needed a doggie-sitter. It's great not having a dog that's scared or aggressive. We give ourselves pats on the back for raising a sweet and happy puppy. 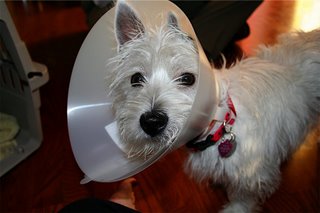 Our latest challenge with Three is caring for her post-spay. She was spayed on Monday, March 26th and has many stitches on her cute little puppy belly. She has to wear an "E" collar for 14 days. So far she's doing great although it's clear she's getting boreder by the day and is frustrated when she can't scratch an itch! I cried the first day we brought her home because she wouldn't walk and was confused by the collar. I cried because I wished I could communicate to her what was going on and why she was sporting a new accessory. Oh well...what will I do when we have human babies?!?!

In any case, we love our Three - or as I like to call her Fwree-Fwree, my little puppy girl, blueberry muffin, etc, etc. Like I told Seth, Three is the best thing we've bought since we've been married. It really is rewarding to watch her grow and learn and know we can give ourselves some credit for that. We hope this is a good sign for raising our future kids :)
Posted by Kelley at 5:57 PM