We spent 2 hours at the vet on Saturday morning only to come away feeling no sense of accomplishment or relief as to how to help our puppy dog. During the past week, Three had a couple of accidents in the house which is highly unusual for her at this point. Then we noticed when we'd let her outside she was peeing more than one time each trip. At first we thought she could possibly be marking (even though this is mostly something boy dogs do) because she's seen that our neighbor's stupid dog comes in our yard to do his business sometimes. We thought she might be feeling territorial (or terrier-torial.) But by Friday when it was still going on and she seemed antsy at night and always had the "I need to go pee pee" look on her face, we decided to go have her checked out.

Our vet is open from 9am-1pm on Saturdays so this worked out well for our schedules. We suspected she might have a UTI. We took her in and they did a urinalysis, took an x-ray, and even drew some blood. The urinalysis didn't show a UTI, but did show that she had some calcium oxidate crystals in her urine which can sometimes indicate the presence of a stone (in her bladder or kidney). Hence, the x-ray...which was disappointing. They didn't see one in her bladder, but saw some weird spot on the x-ray which COULD be a stone traveling from her kidney to her bladder but THEY WEREN'T SURE. Great! :|

They drew blood because Three has Addison's Disease and they want to do a stem test to make sure all her cortisol levels are where they should be. This takes a few days so we won't know if that's the problem until early this week. We left with some antibiotics to give her just in case she was in the early stages of a UTI, but so far we can't tell if they are helping much. She's still peeing more than once when we take her out (but not as much). And, $242 later, we got to leave the vet.

The thing is, as much as that stings the wallet (esp. on a month when I got UNDERPAID by about $500+ - long story), I would do anything for that dog. She is my love and my sweet angel baby and money seems to be no object if it means we can make our dog feel better. Saturday night Seth went to play poker and it was just me and Three, home alone. She was curled up on the warmest blanket ever sleeping away and I found myself just watching her. My eyes welled up with tears remembering how scary it was when she was first diagnosed with Addison's. We almost lost her back then, but they diagnosed her at the last minute. I feel for her when she's not feeling well or something is bothering her. I want to fix it for her and when I can't I get all emotional. That's not easy for me either thanks to the ole Lexapro. For tears to come to my eyes, I must be really affected by something.

Basically, I'd do anything for Three. She's the best thing we have right now and we'll protect her like crazy if it means she'll be happy. 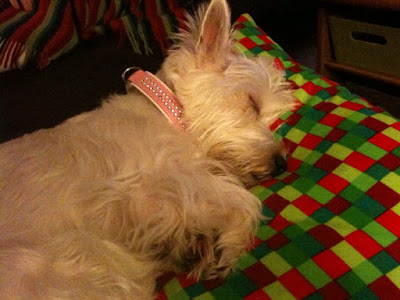