This year, we spent our 4th of July weekend in Lutz, Florida, with who seems to be our mirror-image couple, George & Leigh. These punks moved down to Florida a year ago this September and we've yet to forgive them. BUT, we still try to grace them with our presence every so often.

This was our second visit, the first being last December for New Years Eve. We've apparently got this thing with holidays and Florida. Seth and I took Friday off and drove down. That's not a typo, we really drove. All 10 hours. It wasn't even close to as bad as the last trip which took 12 hours thanks to some stand-still traffic. I napped a few times, and Seth happily drove. We hardly stopped for even bathroom breaks thanks to my current state of water-retention. So we made good time is all I'm saying.

Saturday, we spent the day out since some furniture was being moved out of their house. We wanted to make sure we didn't get recruited to help. We drove to Tampa and parked and then took the Tampa Trolley to Ybor City for some delicious breakfast crepes at a local creperie. 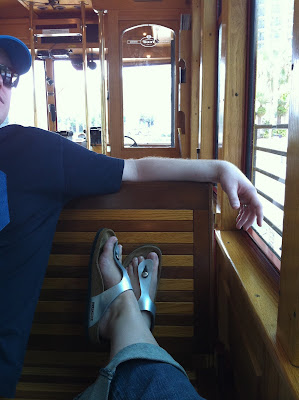 I got a wonderful spinach, feta, tomato, egg, and cheese crepe and we (as in everyone but George) shared a "sweet" apricot & cream cheese crepe to finish breakfast off in high foodie style. We had to eat big to last us through the day. 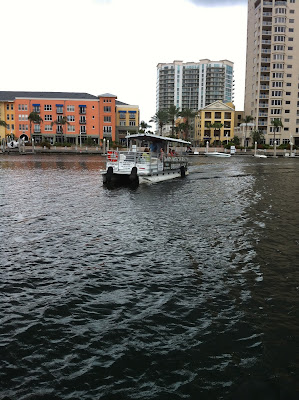 We got back on the Trolley and took it up a ways to where we wanted to catch a water taxi which would then drop us off at the brand new Tampa Museum of Art. Our taxi captain and his wife were two of a kind. I'll just say they weren't our kind of hosts, but we survived unscathed and decided to skip the water taxi on the way back to the Trolley. 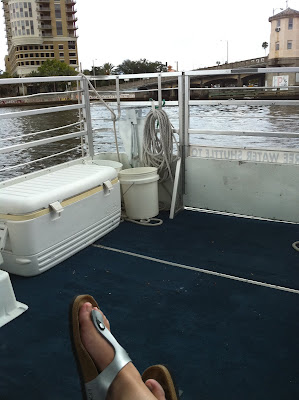 It rained toward the end of our ride and we got a wee bit wet. AND WE DIED BECAUSE WE HAD NO PONCHOS. NO PONCHOOOOOS. OMGNOPONCHOS! Inside joke. Moving on. 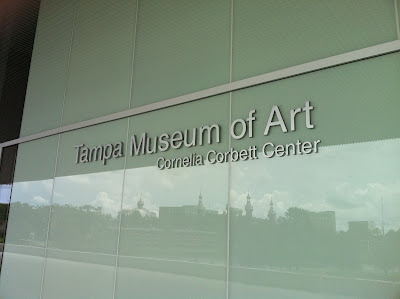 We dried off for a second before heading inside to check out the TMOA. The exterior of the building was super-cool and we figured the inside would be as well. We paid $10 each to get in, but it seemed more like a $5 kind of joint. HOWEVER, once we left and were outside the building again, we all couldn't shake the feeling that we had missed something...or several somethings. The building was twice as big as the area we toured and we left wondering if we were too stupid to navigate the building correctly. We saw some fun LED art, I guess?

At this point, the rain had stopped, and the sun was peeking out so we began walking in the post-rainshower steam bath weather as any normal and sane group of people would do (I wish there was some HTML code to indicate sarcasm. I'd insert it here.) We walked back and caught the air-conditioned trolley back to Ybor City where we parked it for a bit and had a few drinks at the Tampa Bay Brewing Co. outside, under the misting fans. Ahhh...a little bit of relaxation to end our tour of downtown Tampa. And the only time and place I was able to get a tiny bit of sun on my glaring white arms.

I have no pictures from the rest of our Saturday so let's just get on with our 4th of July festivities. Nothing really exciting happened Saturday night other than we ate pizza and I fell asleep at like 7:30 or something. No really, it's true.

Sunday, we had no hard and fast plans so here's how it went. Seth and I slept in and took our sweet time getting ready simply because we could. I wanted to take a trip to IKEA because it's just what you do when you're within 30 miles of one. It's just natural. G&L said they wanted to join us so off we went. We stopped somewhere first, but I really can't remember where that was? AM STUPID. IKEA is more important than that stupid destination anyway. Perhaps it was Pinch-A-Penny? Again, not important.

At IKEA, we joined the rest of Tampa in shopping for a few random things. I had some shelves and planters in mind, but the shelves seemed like too much work so I got the planters and my favorite framed artwork that I've been drooling over and we called it quits.

Then we all harassed George until he replace the Big Green Egg that Leigh's brother moved out in the great move-out the day before. 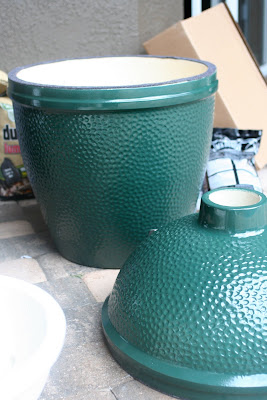 The Big Green Egg is George's love and he broke down and bought one. 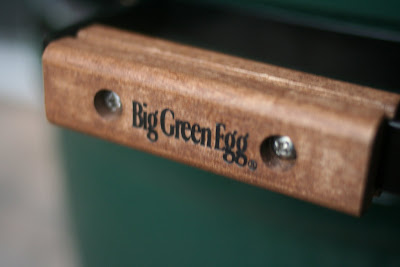 SWEET! That meant we were in for a good dinner on the 4th! 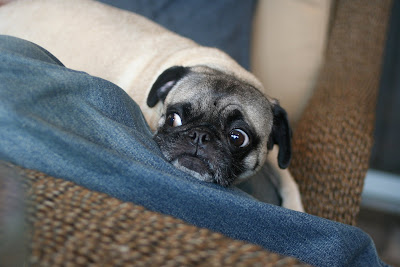 Rotunda wasn't so sure about all this egg stuff, but she was patient and watched her daddy set things up. 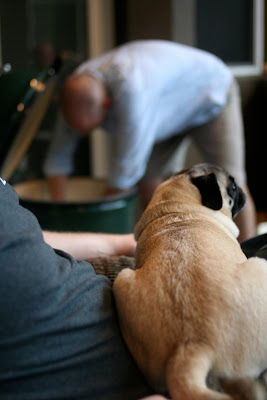 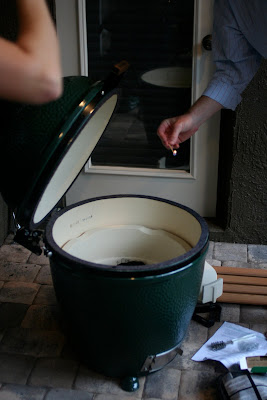 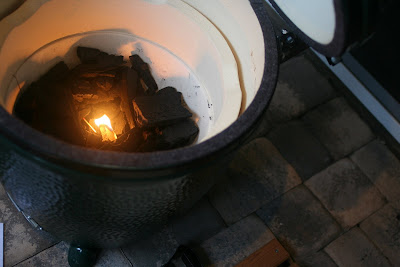 So we could have salmon... 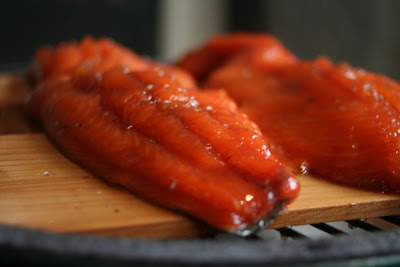 Please excuse my blurry pictures. It was getting late and light was low.

While we waited for our salmon to smoke there was this... 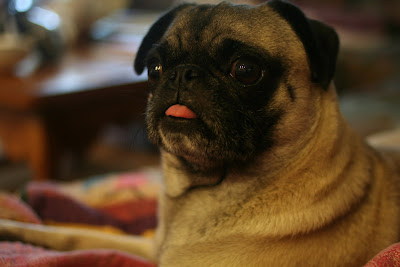 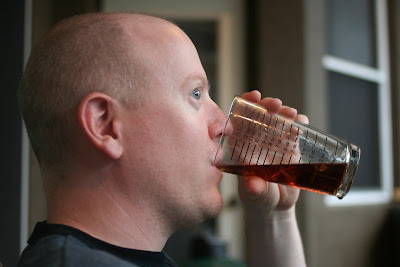 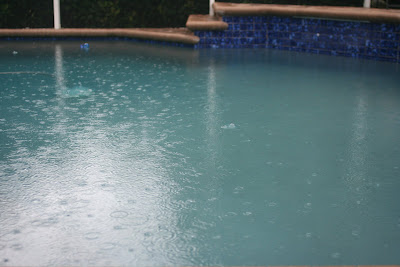 and then some of this... 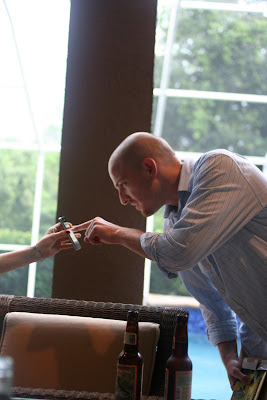 and then also lots of this (Rotunda knows how to party)... 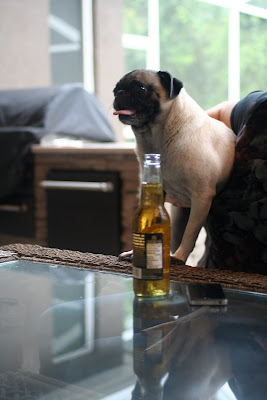 After we ran barefoot into the cul-du-sac to watch a 360 random display of neighborly fireworks, we wrapped our evening with a delicious citronella candle light dinner by the pool. Then George, Leigh and Seth started getting all serious talking about life and empathy and I peaced out and went to bed. Because I'm not all that serious.

It was a great weekend and we debated spending another night but I didn't pack enough of my crazy pills and thus we headed home early Monday morning...in the rain. Thanks for raining on us AGAIN this trip, Tampa. Maybe one day you'll show us some love and shine on us.
Posted by Kelley at 3:08 PM