I love sleeping. I've been good at it since I was a baby according to my mom. Husband will tell you the same. If I'm horizontal, I'll probably fall asleep. Here I am napping with my Westie.

I'm sure I was sleeping through a NASCAR race or some other sporting event designed to lull ladies to sleep on a Sunday afternoon. Don't you love how he took the time and effort to take a panoramic shot of me and Westie snoozing?

Given this, my proclivity for sleeping, I suspect this is where my obsession with bedding stems. I can't get enough of it - much like sleep. I noticed this obsession in college when each year I thought I needed to have an entirely new set of bedding for my dorm room. I know I had 2 different duvets Freshmen and Sophomore year, but I somehow managed to use the same Tommy Hilfiger comforter Junior and Senior year. I know, I'm astonished myself.

After college, and upon getting my first job, I got my first apartment. A charming 1949, 700 square foot, story-and-a-half townhouse in Cameron Village. I had the tiniest of kitchens, no dishwasher, no central A/C (just 2 HUGE wall units - one up, one down), but I did have lovely hardwood floors both upstairs and down.

The entire upstairs (minus the tiny bathroom) was my bedroom - and it was huge. I brought in my bed from my parent's house as well as the bedding. I painted the room to match and it ended up being almost the identical color as my childhood bedroom. It didn't take long until I decided I wanted new bedding. I don't remember what triggered it, but I remember getting the duvet and shams plus the cutest little quilt to lay at the foot of the bed, and I remember thinking how designer my bed looked. It wasn't - it was a red/white check duvet. But it was cute and fun and I loved it!

From that point on, I just couldn't buy enough bedding. Mostly I bought sheets of various patterns and colors and thread counts. From jersey knit to sateen to cotton. It was fun and a semi-inexpensive way to make my bed feel new without replacing the entire duvet.

But then...the flood gates opened after husband and I got married and I've bought too many duvets and bed sets to name. But I will try. I have 3 from IKEA (all $20 for duvet and 2 shams), 4 from Pottery Barn, one from eBay, and one group of things I tried to make into something cute all bought from Target. It's just insane. I usually just buy the duvet before I go all out on shams and things so some of my sets aren't exactly complete. I have 2 bed skirts from Pottery Barn and then we bought a new bed which doesn't need a bed skirt. So those are out. I have several quilts and matelasses, some old, some new and I rotate them. Most of them have shrunk, which reminds me...I need a new matelasse.....

Back to my point. I love bedding and I swore not too long ago that I was going to stick with the cute and comfy IKEA bedding that's on our bed now. In fact, there is an IKEA duvet + shams AND an IKEA quilt + 2 Euro shams on the bed all at one time. I'm out of control. But then I saw the West Elm Fall Preview on Elements of Style and I fell in love with another duvet. Here's a peek: 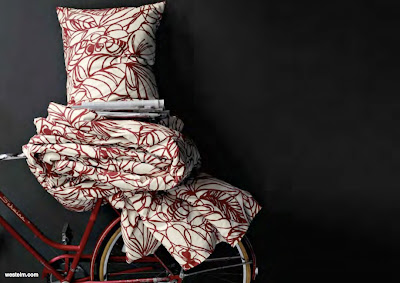 And to that I say I need both of these sheet sets from Serena & Lily because I love putting patterns together and both of these would be so fun to wallow on. 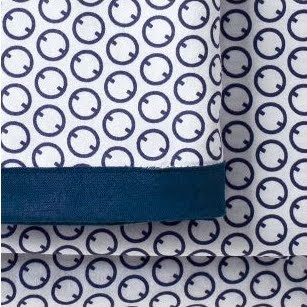 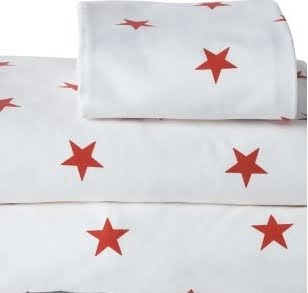 So cute, so fun, so colorful.

My master bedroom is up next on my list of rooms to start working on in addition to my downstairs bathroom. I love having red in my bedroom. Among all the bedding I've ever bought, a lot of it has big punches of red and although they say red evokes feelings of anger and it's not always good to have red in the bedroom, I love it. I don't put it on the walls, it's in pillows and rugs and quilts. It makes me happy and gives the room some warmth.

I want to bring in navy or a royal blue to the room, too. Hence the Lapis French Ring sheet. The rings on the sheets echo the loose rings in the duvet and I love the colors together.
Posted by Kelley at 10:21 AM