Saturday morning I woke up around 8:30, hopped in the shower for the umpteenth time since we moved in and decided that day was as good as any to RIP OUT OUR SHOWER DOOR. Yes, yes it was. And we did it. It was fun.

See, glass shower doors may be preferred by most, but me, I don't really care for them. They are impossible to keep clean and once coated with crap, good luck finding a product to remove it. They NEVER look like new again. I tried IT ALL at our last house. When we moved into our current house, the glass wasn't terrible, but it wasn't good either. But the worst part was the MILDEW and MOLD. Ugh. Gag. It was terrible.

Our house was built in 2006 and lived in by the builder and her family for 2 years. Then they decided to rent it for the next 2 years while she started on her next renovation project. I am of the theory that the renters NEVER cleaned the shower. It was just disgusting. The clear silicone caulk not only had mildew ON it but IN it and UNDER it. It just wasn't cleanable. And when I did try to clean the shower, I nearly gagged when layer upon layer of mold and mildew came off on my sponge. It's hard to take a good shower when you feel like you're all moldy when you step out.

Coupled with the fact that Seth would bump his cute little head on the upper bar of the door at times, I saw no reason not to rip that sucker out. So here's what we had before: 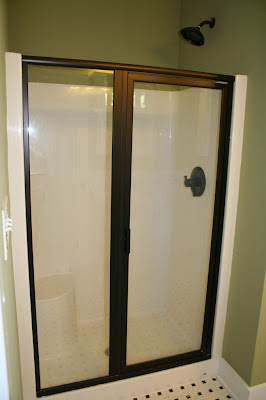 I took no photographs of this process because we made it up as we went. Plus, the sheer disgustingness of the mildew and mold would've sent the internets packing after one look at this entry.

Basically, we cut the silicone with a utility knife on all sides just to free it up (although we quickly learned that wasn't necessary as the silicone was easy to rip with no assistance). The shower door was only held to the fiberglass shower by 6 screws. Three on each vertical wall. I was surprised that none held down the bottom rail. We tugged and ripped and unscrewed until finally that baby was out! YAY! We were left with some stubborn silicone to remove (this is after I scraped with a razor blade) and some holes to fill. So we went to Lowe's.

We used a sandable, paintable epoxy to fill the holes (although no need to paint - it was a near-perfect color match) and found some silicone remover which helped me get off the last of the silicone. I scraped until I could see no more mold or mildew and then I cleaned our shower within an inch of its life. WHEW. Cleanliness!

While we were out at Lowe's we hit up Target for a new shower curtain, liner, and pole, as well as an organizer for the shower wall. We used to have one that hung over the glass door, but clearly that wasn't an option any longer.

I couldn't find a picture of the shower curtain we bought, but here's a close enough: 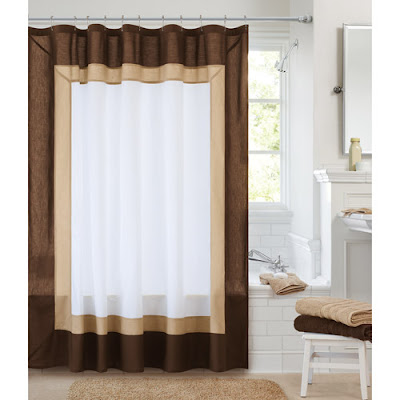 Ours is this same one except the dark brown is a deep red, the light brown is a dark brown, and the center color is the same. It's a nice heavy lined linen curtain. I am going to have the center monogrammed. Yummy.

I'm in the process of painting the bathroom "Resort Tan" by Sherwin-Williams. It's nice just to get a clean new coat of paint on the water-streaked walls. I will take pics and post them soon.
Posted by Kelley at 12:34 PM