As we grow up, our families grow out and that can mean major growing pains for all members of the family. For some, this causes strife and grief, but hopefully for most, it just means your family extends and you find new ways to celebrate during the holidays.

This years Thanksgiving in the McFarland & West households were quite different. My MIL was working her fingers to the bone at Hallmark so I volunteered our humble abode to host the traditional McFarland Thanksgiving lunch. It was a first for me, I'd never hosted a major holiday meal before. Thankfully, my MIL DID contribute the delicious turkey and stuffing, Pennsylvania-style so that helped me immensely! 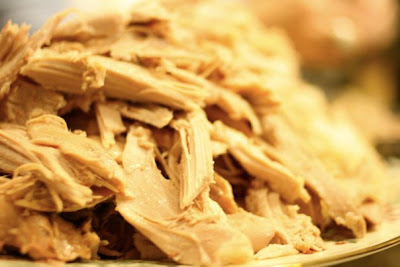 She went to work carving away as soon as she walked in the door. I hooked her up with my sorry excuse for an apron. 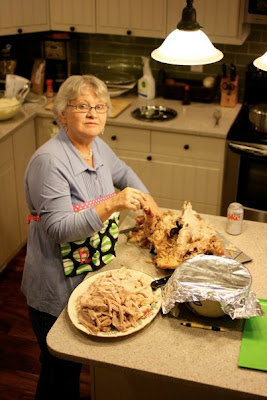 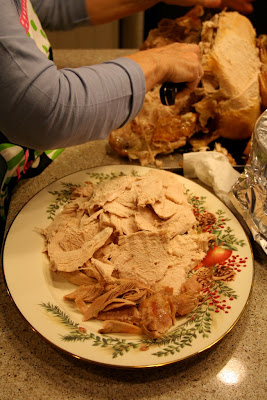 And she made a new best friend during the process. 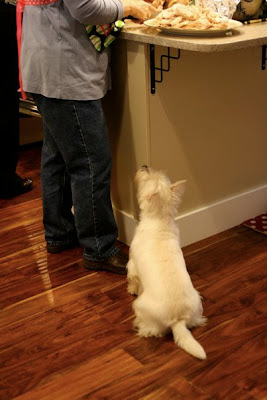 How pitiful is she? (pshhh) 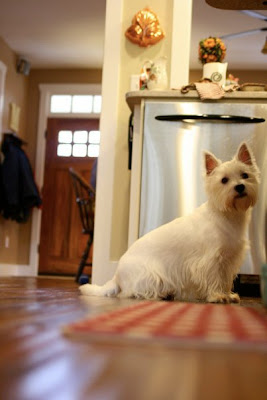 Both moms worked hard helping me get hot food on the table: 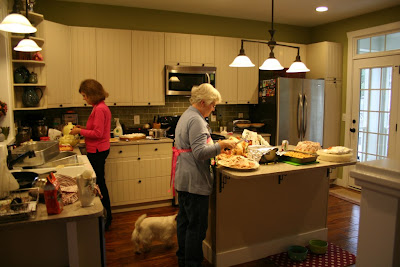 I was in charge of the mashed potatoes, sweet potatoes, butter bean & corn succotash, green bean casserole, 3 desserts (Pumpkin Cream Pie, Dreamy Apple Pie and Sour Cream Pound Cake), bread and drinks! WHEW! I planned well, and got it all done. I made the pumpkin cream pie and pound cake the night before. I totally forgot to cover the pound cake before bed so it sat out all night. It wasn't terribly dried out, though, and I didn't feel like going to the trouble of making another.

I set my table early this year and pulled out allllll the lovely Christmas china I've only used once. I thought my table turned out nice. Not to over the top, but plenty of harvest appeal. 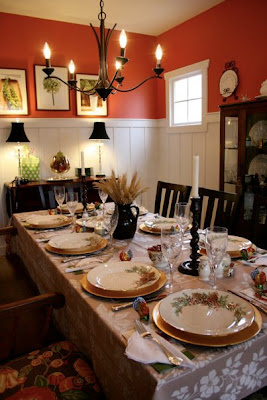 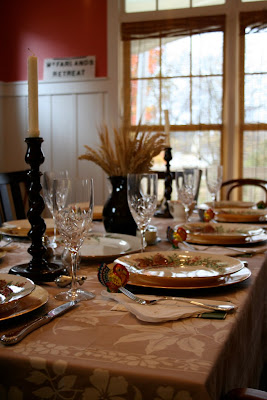 The MIL supplied the chocolate turkeys she managed to wrangle from Hallmark. A must-have for any Thanksgiving tablescape. 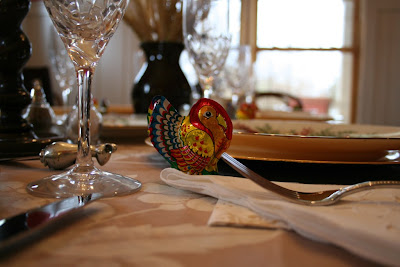 We had a delicious meal this year! Even Three couldn't resist: 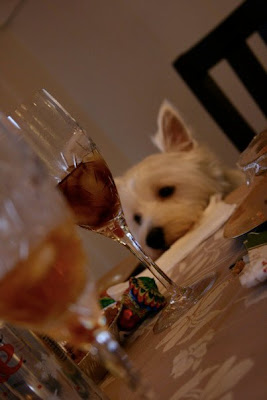 And not too much food this time. New to the mix this year was the McFarland's niece, Molly, who joined us in Apex from Covenant College. Rather than make the trek all the way to her home in Beaver Falls, PA, she graced us with her presence for a few days and took lots of wonderful pics (many of which I've included in this post). Also, my parents joined in. Since my mom's family wasn't getting together for the first time in ages, they had nothing to do until dinner time so I invited them to join and it was quite the help. My mom helped me in the kitchen, cleaning and cooking. One person really can't do this alone!

Since Molly and Skye were both with us on Thanksgiving Day, we decided to celebrate Seth's birthday a little bit early and threw that in with the regular ole Turkey Day festivities. Seth's gift from his folks was an XBOX Kinect which provided lots of good times post-eating and gave everyone a chance to work off just a little of their lunch. Here are a few shots of the action. Think of playing the Wii without controllers. Too weird for me. 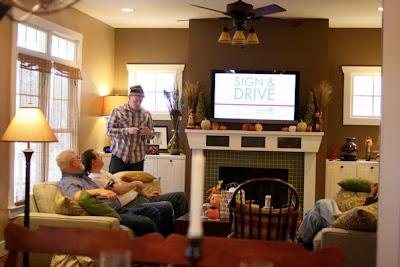 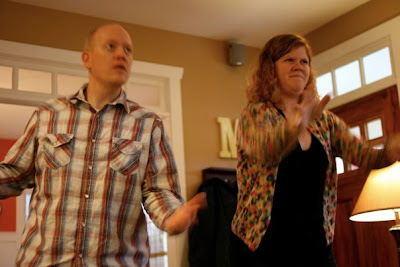 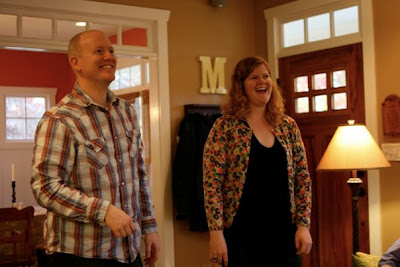 THE AFTERMATH: Three sniffed out any scraps and licked anything that fell during the transport of plates from the dining room to the kitchen: 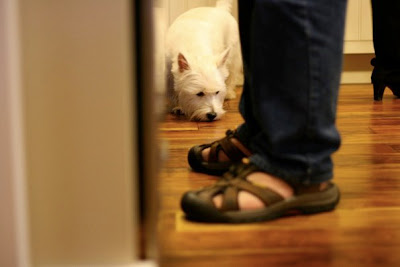 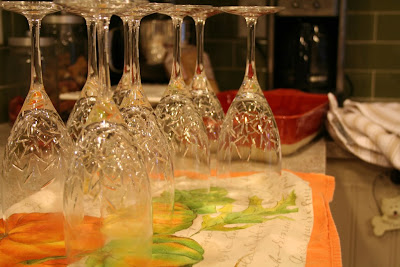 Dishes were stacked for storage, food was wrapped although some sweet things were left sitting out in case cravings for seconds came. 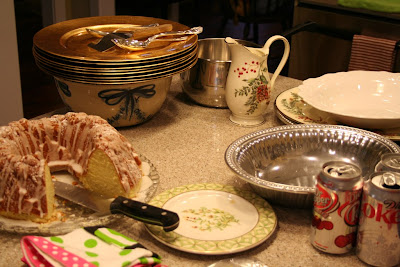 And I sent my in-laws home with a Hooters cup full of left-over gravy. Tee hee hee. 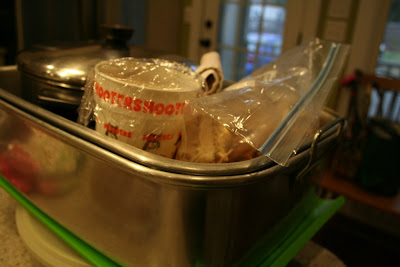 Three kept sniffing for a good while after all was put away, poor starving baby. 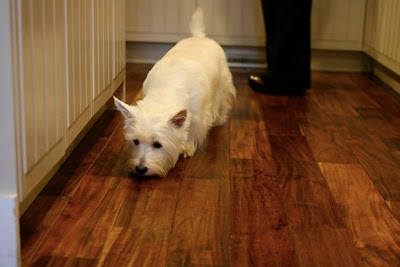 After the Mc's left, Seth and I had about an hour or so until we had to go to my brother and SIL's for dinner. Since getting married, we've had two Thanksgiving meals every year and while it's delicious, it's also a challenge to pace yourself at lunch so you're actually hungry for dinner. I did well this year. I laid on the couch and snoozed for about an hour - I was wiped out from preparing lunch and desserts so if a one-hour cat nap was all I could get, then I was going to cash in!

At the brother and SIL's house, they had prepared a (thankfully) different meal, but with a twist. My brother smoked his turkey on the grill and it was great. Nice and moist and flavorful. They also had mac & cheese, more sweet potatoes, broccoli & cheese casserole, pickled beets (homemade by the SIL! impressive!), deviled eggs, and collard greens. WHEW! 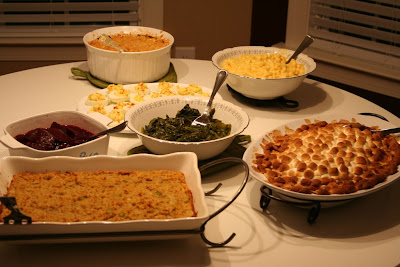 It was all delicious. For dessert, we had my mom's famous fudge pie. And of course, Three begged for turkey there, too. 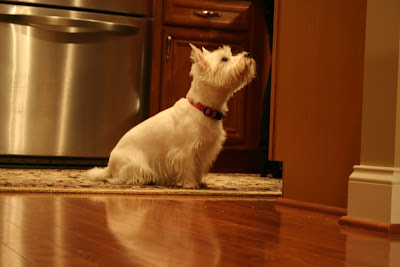 The SIL's mom joined us for dinner as well and it was a great evening of fun conversation and comfort food. A first major holiday meal for the SIL as well (I think). She did great! :)

After dinner, we tried a McFarland tradition - playing games with family! My family isn't known for its game-playing frequency, but we tried it out had a blast (well, at least I thought so). We played Apples to Apples which is an easy-going game of wit, giggles, and humor. My mom and the SIL kicked everyone's butt, but it was still fun. The day ended around 10pm and Seth and I went home and crashed, sleeping in until 10am on Friday.

It was a new kind of Thanksgiving for us this year, but a good kind. We celebrated with family in a new way, in new places, but there's something to be said for bucking tradition.

Friday we welcomed our friends who moved to Florida last year (jerks). Since they have family in North Carolina, it's hard to get time to hang out with them while they are here, but we managed to steal a night. They came over around 5pm and we grilled out hot dogs and hamburgers, french fries, and dessert - our usual when we get together. They brought their 4-year-old pug, Rotunda, and she and Three had an .... interesting time. Three was mostly interested in sniffing Rotunda's rear, but other than that, they tolerated each other fairly well.

We spent some time playing on the Kinect and then entertained ourselves watching Drunk History(s) on YouTube. HILARIOUS. Please go watch all of them now. Then, we all realized how old we are and we went to bed around 11pm. We sure can party. Also, I took not one photo.

Saturday was a free day of sorts. I got up around 8:30 to send off the Florida punks, but was back asleep on the sofa by 10:30 and didn't wake up until 1pm. Seth and I camped out on the couches for most of the day waiting for a pizza dinner with the McFarland's which never came to be. We skipped showers and getting dressed in real clothes and opted for an all-day TV watching fest instead. I took another nap later in the day and was still able to sleep soundly that night. I am a sleeping champ.

Sunday was back to normal with church, lunch and a post-lunch nap on the couch during football. However, Sunday night proved to be a dramatic ending to an otherwise joyous four-day weekend. Nineteen of my mom's family members got together for a spaghetti dinner - a family tradition started by my Grandmother years ago - to celebrate some family birthdays, mainly my cousin Brittany's 18th birthday. After B opened her presents, her dad (my uncle) said they were leaving because B hadn't been feeling well and was running a fever. Could've fooled all of us - she didn't act sick at all - what a good sport.

As they were about to head out the door, my great aunt came out of the bathroom looking faint and holding her head. Luckily my other aunt was standing there waiting her turn and caught her before she fell. She yelled for my uncle (B's dad) since he is a seasoned EMT. He picked her up, put her in a chair, we got cold towels and a bag (she thought she might lose her dinner) and he called an ambulance. The FIRE TRUCK got there first. I've illustrated below in order to set you a mental scene of the SCENE we caused. My mom lives on a little circle off of a pretty major road so I'm sure all the neighbors and passers-by thought something awful had happened. 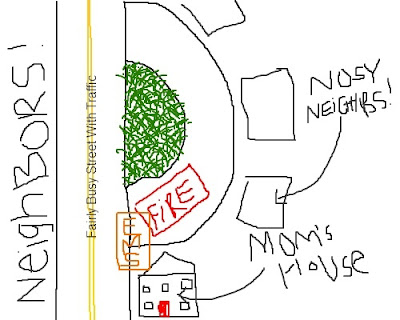 Nevermind us, just a minor fainting spell. Guess that's what you get when your uncle is an EMT. He really rolls out the red carpet for us!

In the meantime, my poor cousin was in tears and trying hide them from my great aunt. Poor girl just felt bad and wanted to go home and right when they were about to leave, my uncle has to spring into action and would be tied up for a good while. She called her mom to come get her. I felt bad for her.

Not to worry, though. My aunt was fine and laughing by the time they took her out. She wanted to go home to her own bed, but they took her to the hospital anyway just to make sure all was well. We suspect she got too hot, but one never knows. It was a drama-filled ending to a family event at which I again took not a single photo. Sorry times two.
Posted by Kelley at 4:33 PM