Day 4 consisted of all electrical work. And concluded with our first let-down of the project. I'll get that in a minute.

First up, our new lights!

In this photo you can see that our old bathroom fan was removed and will be replace with a shower light + fan in one unit. I'm glad about this - we weren't going to replace it at first - because look how it would have interrupted the flow of the pot lights. Once that hole is filled, the ceiling will look a lot less cluttered. 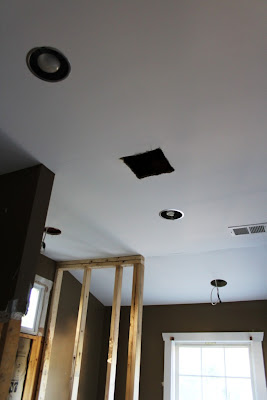 Here's a shot of where our old shower stood. You can see that the original pot light has been removed,  and the one at the top of the photo is a new one which will give us back some light near the door. 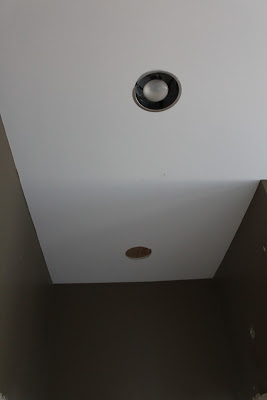 They also added a new light near the toilet. Previously, it wasn't necessary because the halfwall allowed light to travel around the room. Since we put up a full wall in it's place, we didn't want to have a cave of a toilet area so we thought adding another one on that side of the room would be a good idea.

(And yes, for those of you that know me and my insane obsession with symmetry, it DOES bother me that that light is not centered on the window. I'm sure there's a reason for it, but I'll just have to get over it.) 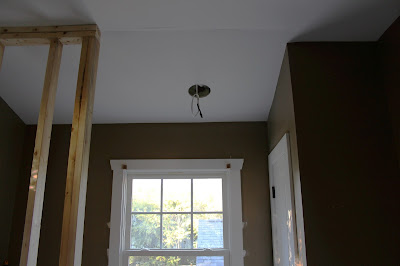 
Lastly, our first little bump in the road. Here you can see they removed our old lights and prepped for the new sconces. They were going to wait until the day the lights would actually be hung to put in new holes lower on the wall, so don't think we were going to install our sconces that high or that we're morons. 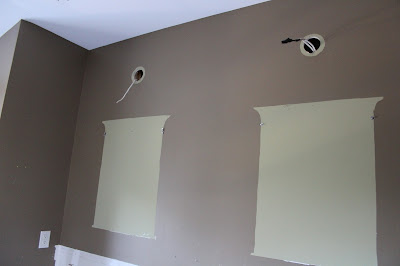 HOWEVER. Our GC emailed me to say once they got everything down and started measuring, he realized there's not going to be room for 3 sconces and 2 mirrors. Cue the crying. (JK, Lexapro won't let me cry). SO, we have to rework the mirrors and lights. It seems in any type of layout, we can't use all 3 sconces and maybe none at all. I am currently scouring the internet and Pinterest for ideas for bathroom lighting. So far it seems that sconces are the most popular which is frustrating.

To back track a little - in the beginning, we discussed removing the linen closet that you can see in the far left side of the picture above. That would've given us more room side to side, but we eventually decided against it since the sink on the left would kind of be in front of the toilet. A little weird. So we left that closet in. We use it a lot anyway. Now I'm rethinking that, although I can't see losing that closet and the toilet proximity issue would still be there.

I'll keep you update on the progress and what we come up with. For now, here's a nighttime shot of the whole bathroom. We have no electricity in there right now - hence the darker photos above and the use of flash in the photo below.  I hate using flash! 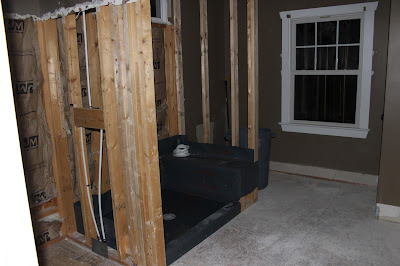