Day 5 carried over into a Saturday Day 6 starting at 8am. I'm not sure much, if anything, was done on Friday - aside from an inspection. So nothing new was visible in the bathroom.

Saturday started early when the carpenters showed up to install our new window. They are booked pretty tight so we were happy to accomodate them for a few hours. Better an early rise than a delayed project. Here's the (dark photo) result. 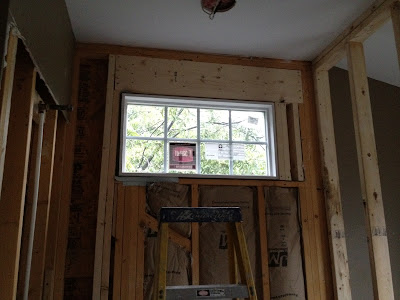 Compared to our previous window. 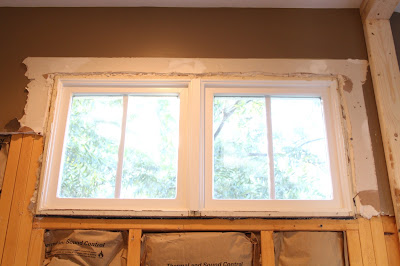 The window lets in a little more light and gives us an unbroken view to the pecan tree outside. I like the new window alot. They also centered the window in the new shower space and I'm looking forward to seeing it all walled in to get the full effect of the centering (it's hard to see with all those vertical boards).

We had 2 separate meetings/conversations with our GC this weekend regarding our mirror and sconce situation. After looking for non-sconce inspiration and failing, we've decided to nix our current linen closet in order to gain the wiggle room we need to be able to use the sconces and mirrors we've purchased. We're both happy with that choice. It's going to open up the bathroom even more (even though the closet is in a corner). Bonus - the curtains I plan to hang won't look all smooshed up against the closet anymore!

Monday was to be more inspections, but our GC delayed those because we're making significant electrical and plumbing changes with our new plan. We also gained an outlet in our old shower location, but we're changing its location just in case we want to put in built-ins later down the line.
Posted by Kelley at 11:06 AM