I'm Such A Dork

But I have to point out that my photo of my YHL book is part of the collage of reader photos in today's YHL post about their book bid-ness. 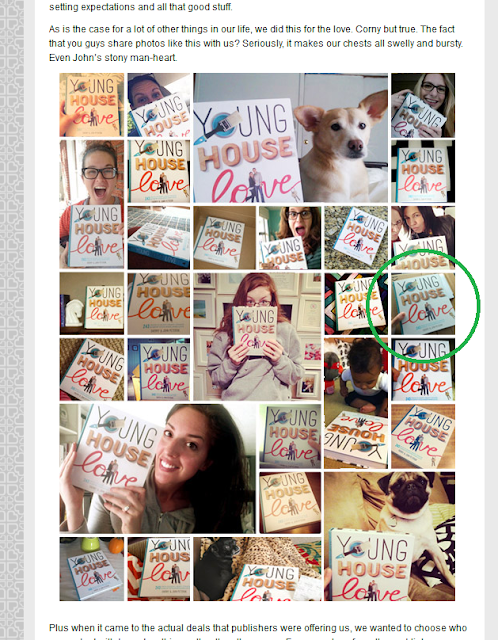 We were in the car. Hubs pulled over to the mailbox and there is was in a little book-sized cardboard mailer (you can see that underneath the book in the pic). Aww, I feel spay-shull.

Things have been craptastic since I last updated.

So our lunatic buyer miraculously came back a few days later like a grown ass woman and resubmitted the offer we had previously negotiated over email. It was a Christmas miracle! Her agent claimed she had "worked it out with her son" and all was good in the world again and just like that - we were under contract.

We went UC on January 4th, just in time for some house hunting on January 5th. Which was fun, but stirred up a whole mess of confusion in our heads. I won't get into that, though.

The following Friday, January 11th, my office was supposed to close at noon to have a transformer repaired. This closing was announced the previous Wednesday and in my excitement I scheduled lots of showings and a meeting with the builder of a home we liked to discuss customizations. THEN the office decided to stay open and work on the transformer on Saturday, but alas, I took the afternoon off anyway.

So, Friday we saw a couple of homes and then went to a meeting with the builder. We went through our laundry list of wishes and hopes and dreams and he took note of them all. Sometimes saying "No prob" and others saying he'd run it past the boss. Sweet. All good. Then we went over to see the house again. They've built a spec house of the plan we like so we went there to see it in person again and come up with more tweaks we'd like to make. Again, fun. To see it finished and all cleaned up was great and just got me that much more excited to build our own, special version of it.

Part of this story includes the inspection of our current house by our looney buyer. The inspection was scheduled from noon to 5pm on Friday, which made our house hunting and meeting with the builder even more timely.

After our day of fun we headed back home. When I walked in, everything looked just as I left it. Almost TOO MUCH like I left it. Almost like NO INSPECTION HAD ACTUALLY TAKEN PLACE. I mentioned it to the hubs and he emailed our agent to get confirmation from looney's agent that the inspection went down and went well.

WELL, around 8pm our agent forwards us an email from looney's agent time-stamped 7:42pm that the buyer was TERMINATING THE CONTRACT. WTF? Yes, you read that right. She changed her mind. It just took her several visits to the house to confirm her "gut" feeling that she wanted to back out. heh. I'll give you a gut feeling, you crazy B!

So just like that, and on the day of a great meeting with the builder, we're back at square one AGAIN.

I was so .... something ... it was hard to even feel an emotion over anger. WHO DOES THAT? Who puts in an offer on a house they've seen at least three times and THEN waits another WEEK to TERMINATE? I mean, maybe if you were normal and you put in an offer with no fuss - but this lady drug us through the mud. She low-balled us $25k on her first offer, then came up $5k but wanted about $3k worth of personal property. Then when we finally agreed she bailed on the offer. Then she comes back and all seems good with the world. She put in a short due diligence period which seemed like a good thing. Maybe her $100 due diligence fee should've tipped us off. I just can't believe it. Had it not happened the very day we FINALLY met with the builder, I might not have had such a horrible reaction.

I went to bed pissed off. I woke up at 5:30am still pissed off and unable to go back to sleep for a while.

I hate square one. And I hate MM who works at SAS. She's a moron.
Posted by Kelley at 4:11 PM No comments:

Gee, it's been a while since I've posted, huh? Well, there's a good reason for that. A reason I've not really wanted to share, but now I just feel like sharing so here goes.

We put our house on the market.

But some stuff happened and we just decided to go for it. We listed the week before Christmas because we are GENIUSES! We had an open house the very first Sunday and five couples came through in just 2 hours. Pretty good, huh? One lady seemed smitten (we weren't there - this is reported by our agent) and we thought we might get an offer. A week goes by and she FINALLY schedules a 2nd showing. After that, radio silence again for a couple of days. Then finally she submitted an offer on Christmas Eve and we were told via text by our agent on Christmas day. MERRY CHRISTMAS TO US!

We reviewed the offer the next day and were totally disappointed. After having only been on the market three weeks, she low-balled us $25,000 under list price. Yeah. IDONTTHINKSO. We submitted a response to her offer (different than a counter offer) basically saying, "We reject your offer, but if you rewrite it more like this we'll look more favorably on it." To that she responds just $5,000 more but now she wants a s**t load of our personal property (all my rugs and all my curtains). Again, IDONTTHINKSO. We were ready to hang up the towel on this lady but with some calm advice from our agent, we wanted HER to walk away, not US. She finally came up to our rock bottom and we accepted.

Her next job was to resubmit her offer and then we'd be under contract. Well, easier said than done. She pulls out of the deal because her 18 year old senior-in-high-school son refuses to come see the house (or move for that matter). #?%#$#:"?#@$:" SERIOUSLY?

Since when do teenagers get ANY say in what house their parents buy? I never did! And this kid is going off to college in the fall so what the heck does he care anyway? Words cannot accurately describe the number of emotions I had at that moment. Dumbfounded, pissed, shocked, but also I was totally laughing at her for her horrendous parenting and ability to stand up to her 18 year old! HUH??

So anyway, now we're back at square one with no offers. We've had some showings but so far no bites. It's frustrating because with an offer so close we (or at least I) had gotten into find mode hardcore so it's hard to just drop that and feel like we can't look right now because we've not sold.

So that's the latest in our world.
Posted by Kelley at 9:37 AM No comments: